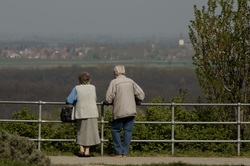 Application of Theory of the Third Age

Peculiar Cases for Having the Third Age before Retirement

The Third Age is literally a third era of one's life and thus comes between the Second and Fourth Ages, generally at retirement (Laslett, 1987, 1991). In some cases, however, peculiar people have the Third Age, that is, a culmination of life, already before retirement.

Such people have the Third Age and the First Age for learning or Second Age for working simultaneously (Laslett, 1987, 1991). Laslett specifically exemplified talented athletes, prominent researchers, entertainers, and politicians. For example, an athlete who is a college student, as well as participates in an Olympic game has both First and Third Ages. Moreover, eminent researchers, entertainers, and politicians have both Second and Third Ages due to their achievement raising the extent of famousness.

Athletes decide when to retire from active play, depending on their ability for the sport. Figure skaters may retire around their 20s, whereas baseball players can play until around 40s. Then, some of them will possibly become a coach, sport program commentator, or the like. Prominent researchers who continue studying independently after retirement, entertainers, and politicians actually do not have retirement. These special people can have a long Third Age (i.e., a culmination of life) with the First or Second Age simultaneously and thus a very blessed life.

Except for those particularly privileged, people have the Third Age generally after retirement (Laslett, 1987; 1991). Laslett emphasized that all four ages would originally start on a personal choice, not on their birthday or a year around the birthday, except for the Third Age (i.e., a culmination of life) that would generally begin after retirement against one's intension due to a country's pension scheme. His insistence was rationale, considering the aforementioned special blessed people.


Social and Economic Conditions for Emergence of the Third Age

For the Third Age to emerge in countries, two conditions should be met (Laslett, 1987; 1991). One is social, and the other is economic. The social condition is population aging, and the economic condition is sufficient pension to distribute to all retirees.

For the economic condition, as national wealth (e.g., pensions, and public or private savings), GNP (currently GNI) of that country is at least three or more times of the world average and distributed as necessary incomes (pensions) for all third agers appropriately (Laslett, 1987, 1991).

East or South European countries, which meet only the population aging condition, are not very rich to supply sufficient pensions to third agers, and thus quality of life for third agers is low (Laslett, 1987, 1991). Meanwhile, oil-producing countries are rich, but the citizens do not necessarily live long sufficiently to have the Third Age. Therefore, Laslett (1987, 1991) mentioned that the Third Age would not emerge if both social and economic conditions are not met.

Currently, human longevity is globally extended, and industrialization advances in any countries. Laslett (1987, 1991) anticipated that both conditions would be met globally and that the Third Age would emerge everywhere.

The 2009 top 20 GNI PPP countries, except for Denmark, were in the top 2005-2010 average life expectancy countries. Consequently, these 19 countries were recent countries with both social and economic conditions and thus the Third Age.


Differences with Other Human Development Theories

One of eminent characteristics of Laslett's (1987, 1991) theory of the Third Age is its definition for the Third Age, an era generally after retirement with physical and mental health, as a culmination of life. Here, to clarify this characteristic, Laslett's theory is compared with two other theories related to old age: hierarchy of needs and activity theory.

Generally, when a person satisfies a lower need, that person wants to meet the next one, and so on (Maslow, 1954). Each of hierarchical needs can also be applicable for human developmental stages. Biological and physiological needs are infants', and safety needs are juveniles' ones. Likewise, social and esteem needs are applicable for youths' and adults' ones, respectively. Thus, the final stage, growth needs are for seniors' ones. Actually, Maslow's (1954) concept of self-actualization matches life fulfillment in Laslett's (1987, 1991) theory of the Third Age. Unlike Laslett (1987, 1991), however, Maslow did not clearly define old age is a culmination of life nor assume age with mental or physical decline and death.

Meanwhile, of the U.S. four aging theories (i.e., disengagement theory, activity theory, continuity theory, and exchange theory), activity theory has a premise: the more active elders are, the better their old age is. According to representative activity theorists, Lemon, Bengtson, and Peterson (1972), the fewer seniors lose their role, the higher their extent of activity is; such higher extent of activity results in more role support; the more role support leads to more positive self concept and thus higher life satisfaction. Even during old age, if people are more active, they might have more number of social relationships and thus more life satisfaction. Unlike Laslett (1987, 1991), however, the activity theorists did not assume that the older people grow, the more their physical, mental decline increase, inevitably.

Laslett (1987, 1991) described that old age with health, vigor, and positive attitude is the Third Age (a culmination of life) but that seniors would have the next age with physical or mental decline or death (the Fourth Age), reluctantly. Consequently, his theory of the Third Age is more rationale, compared to the aforementioned growth theory and aging theory.

Laslett (1987, 1991) considered the Third Age (healthy age generally after retirement) positively for life fulfillment. Yet, he exemplified 14 fears about growing old (Laslett, 1991), which second agers may be actually afraid of more than third agers. Aging theories tend to be positive or negative. Only Lslett theory has both positive perspective and negative aspect: realistic 14 fears about growing old.

Specifically, the 14 fears about growing old are as follows.

1. Death
2. Alzheimer’s disease
3. Cancer or heart disease
4. Blindness, deafness, lameness, or incontinence
5. Physical debility, mental decline and illness
6. Loss of beauty, attractiveness, fertility, or potency
7. Inability to recall names, events, people, or experiences
8. Loss of keenness of hearing, eyesight, and smell
9. Loss of mobility, being indoors, and the consequent loss of choice of places to go and things to do
10. Loss of earning-power, being retired, or unemployed because of age
11. Falling status, public status, and private status within the family because of chronological age
12. Loss of spouse, siblings, kin, friends, family, and consequent desolation
13. Loss of home, having to live with other people, or in an institution, and
14. The contraction of the future, frustration in fulfilling the chosen plan of life
(Laslett, 1991).